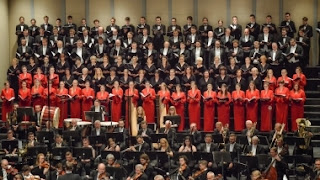 The magnificent Orchestra and Chorus of the National Theater Brno.

Previously I have mentioned why I rarely attend HK Arts Festival events: expense, conservative programming (repetitive), mainstream artists (few surprises) and a very different crowd (more glamorous but less interested in the arts; more to be seen than to see).

Happily, this year's events are truly exceptional. Aside from the artists reviewed in the last two articles, much belatedly here are more:

Aside from the instrumental Sinfonietta, these are all choral pieces I have never quite taken to in my own home listening. Although my equipment can convey the atmosphere of large pieces with aplomb, I do think choral works, especially these in a strange tongue, ultimately stresses any home reproduction and, more than any music, demand to be heard live. More dramatic operas and Requiems fare better in the home system.

Take the Dvorak Stabat Mater as an illustration - you absolutely need the real concert hall dynamics to appreciate this piece, and I am talking about soft passages even more than loud ones. This chorus is outstanding, easily the equal of, if not superior to, the top-drawer LSO Chorus. The tonal quality, ensemble, as well as control of the softest passages to outbursts are well nigh beyond reproach. The conductor, long a choral conductor, obviously was completely in charge and brought out every nuance of the work. In comparison, home listening would be like compressed music.

For me, Janacek's Glagolitic Mass is a more exciting work than Dvorak's. It also received a perfect performance. Except for the tenor (which I prefer), the solid soloists were the same as in Dvorak. I would single out the soprano and bass for praise. However, the real surprise was The Eternal Gospel, a haunting work of rarefied beauty.

As much credit should go to the conductor and the marvelously sensitive orchestra. Although not as big as a symphonic orchestra, this opera orchestra played with great tonal allure and nuance. Everything flowed seamlessly. In terms of refinement, they yield nothing to their counterpart Czech Philharmonic, which I have heard in Rudolfinum.

Bravo! And kudos to the Arts Fest for braving this "second tier" ensemble, which obviously did not sell as many tickets as other more famous ensembles. I hope the Arts Fest shall continue to be more adventurous! We don't need the "big five" or "top ten"! 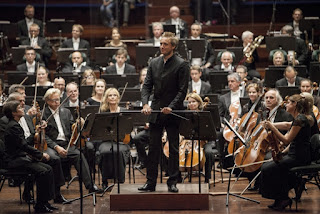 Concert opened with excerpts from Geirr Tveitt's 100 Folk Tunes from Hardanger. Sensitively played, they sound much more interesting than on record. Truls Mork's Elgar Cello Concerto is a known entity. The performance was solid but lacked magic, with virtually no intimation of loss or wistfulness, and that does not a success make.

The second half was a wake-up call. Vasily Petrenko shaped every phrase of the Sibelius Second Symphony with great care, particularly in the gradation of dynamics, and the orchestra was totally responsive. The Crescendos and Decrescendos were like tidal waves and no detail was glossed over. Although Petrenko did not wear his heart on his sleeve (like Barbirolli), his meticulous performance not only miraculously escaped being literal (what happens to lesser conductors and orchestra who claim "faithfulness to the score"), it kept building up in grandeur. The long and difficult finale was all of one piece. The best Sibelius Second I have ever heard live, by a substantial margin.

What a Year!
Posted by doctorjohn at 2:52 AM