In the opera house, the MET Orchestra under the long reign of Levine has always been an excellent orchestra. In non-opera repertoire they seem too to have maintained a small foothold and a high standard, though I have not been overly enamored of their recordings. This marked the first time I heard them outside the MET pit.

It was not surprising at all that the orchestra played with fine nuance and great attention to color and mood. One can say the musicians were almost vocal in their outpouring. However, despite the very fine playing I could not be as enthusiastic as the NYT review. Boulez, though frail, conducted just as he always did, with superb concentration over the considerable span of the Bartok Wooden Prince but, as one is unreasonably to expect from him, underplayed the score's more visceral and elemental aspects. I found the same to be true of Deborah Polaski in Schoenberg's Erwartung: she sang well but I felt she had not injected enough passion into the proceedings; lack of hysteria is a reservation in this of all pieces.

But I was glad for an oppoptunity to hear 2 pieces not commonly encountered in the concert hall.
Posted by doctorjohn at 11:05 AM No comments:

Concert Review: NYPO-Masur May 12, 2010, Avery Fisher Hall NYPO-Kurt Masur Beethoven-Bruckner
Somehow I had not managed to catch Kurt Masur during his reign at the NYPO. Ever since I heard him live in a complete Beethoven cycle with the miraculous Leipzig Gewandhaus Orchestra at Carnegie Hall in the late 70's I have become one of his fans. The NYPO audience, post-Maazel and entering the Alan Gilbert era, gave him a great welcome even before the first down-beat.

The concert opened with Beethoven Symphony No.1. Coming right after Orpheus' performance of No. 2, the difference could not have been greater. Masur's superbly virile performance, with only slightly reduced strings, had a sonorous bass line and prominent balance of winds, reminiscent of the so-called "Central European" style. It revealed many more details and a sophisticated rhythmic sense infused the performance. The "Haydnesque" element was clearly heard. It goes without saying too that the brass and woodwinds far outstripped their Orpheus conterparts. This was a performance by a master who had lived with the piece all his life. Indeed Masur had recorded at least 2 complete cycles on Philips, both with his incomparable Leipzig orchestra. The first, scattered now on several pairs of Philips Duo, is IMHO one of the best ever, and even offers superior sonics to the remake. It is now also available conveniently in a multichannel SACD/CD set issued by the reliable Pentatone.

Of the magnificent Bruckner Symphony No. 7, little need to be said (finally). From the first bar, it completely outclassed a previous performance by the same orchestra conducted by Zubin Mehta. The same sophisticated rhythmic sense also pervaded the breathing performance; subtle rather than forceful, it gave passages, such as the scherzo, a "Schubertian" lilt entirely appropriate for the music. The perfect balance and chording of grand themes could only have come from decades of experience. Diverging a little into HiFi, I shall quote Robert Harley's conclusion on the dCS Puccini/U-Clock: "...simply presents more musical information to the listener without calling attention to the fact that it's presenting more information..." If you read the NYT review, it basically says the same. That is what separates a master from lesser "maestro's". The NYPO played magnificently for Masur. In case you wonder, Masur's also has a solid Bruckner cycle on RCA.
Posted by doctorjohn at 12:23 PM No comments:

May 5, 2010 Symphony in C-Capriccio for Piano and Orchestra-Petrushka (1911)
I have increasingly become fond of Petrushka, and it's wonderful to have heard the complete score performed so magnificently. As previously, the orchestra played with high voltage and great flair under Gergiev. 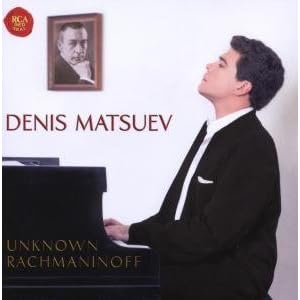 No more need to be said except that the soloist Dennis Matsuev almost stole the limelight. This is one BIG-toned pianist, infallible, with a great rhythmic sense and swagger. Despite its jazz inflection, Cappricio can sound rather tame on records but this team brought it to life. I first took note of this pianist in his famous "Unknown Rachmaninov" CD, played on the composer's own piano, and available in the HKPL. It's worth searching for.

For more info, read the NYT review. For other concerts in the series, see Part I of my review.

It's too bad I could not get tickets for the last program in this series, as much for the Rite as for a chance to hear another star, pianist Alexei Volodin.
Posted by doctorjohn at 8:56 AM No comments:

I was quite happy to discover this under-publicized concert by the famed conductorless Orpheus Chamber Orchestra, sponsored by Korean Daiwo Bank. The hall was about 80% full, with many Asian faces that greeted Violinist Ryu Goto's entry with screaming passion fit for pop-stars.

Ryu Goto is familiar to HK concertgoers for his stunning rendition of Paganini No. 1 with the HK Sinfonietta, one of the most perfect concerti I have ever heard live (reviewed in this Blog previously). Although I was very eager to hear him in the Bruch Violin Concerto No. 1, I have to admit a certain disappointment created by overly high expectation. While he played beautifully, with an exquisite tone, I had one major reservation not mentioned in the NYT review. Volume. His tone was just a shade small for this large hall; bigger than Cho-Ang Lin's, but just enough, lacking the power of some other (maybe lesser) soloists. The perfect solo Paganini encore fared much better and brought back memory of his previous performance in HK. This points up one thing: Paganini is easier to project than many romantic pieces.

I have not been that impressed by Orpheus on record, and so I was surprised by the big sound Orpheus made in this romantic repertoire. The small string body played wonderfully. One did not much miss the big sweep in the Bruch, and gained insight into the part-writing. Again, the strings shone in the Beethoven Symphony No. 2, but I found the woodwinds and brass to be only good and not up to the standard of the strings. Their solo's were relatively bland and their blend was not sophisticated compared to their counterparts in the better orchestras. It follows that I found the opener, Stravinsky's wind and brass-dominated Octet tidy but without flair, which the music sorely needs.
Posted by doctorjohn at 2:10 PM No comments:

I have been attending more and more chamber music concerts. I am not familiar with the American String Quartet, which enjoy longevity (rare in the world of quartets) and apparently, have a fine reputation. At least 3 members are on the faculty of the Manhattan School of Music. This challenging program centers on the Viennese School.

The foursome surprised me. While notably American in their bold playing, their ensemble was of a very high caliber. Blending of the voices was seamless, attacks in unison and solo's delivered with flair. The tightly controlled Webern's Five Movements was a cornucopia of sound, from explosive outbursts to the merest of whispers. The Berg String Quartet, Op 3 that followed was big and splashy. Leader Peter Winograd, steady and infallible, really dug in, not afraid to let in a trace of coarseness.

The lengthy Schubert's Quratet in G, D887 is a challenge for any ensemble. The performance was technically impeccable and although I admired their sheer stamina, I was somehow unmoved, unlike the works from the Second Viennese School that went before. I attribute this to a lack of rhythmic subtlety. The Schubertian lilt was in short supply. Despite bold playing, there was a curious lack of inevitablity, of the inexorable progression, of the "tragic" that one feels in Schubert's late works. In contrast, the Quarttetsatz that opened the program was more suited to their iron-clad approach. All in all, this is a quartet that I shall hear again.

The concert was held at the renovated Merkin Hall. The hall was famed for its acoustics, but I'm not so sure this is true now. For the opener I sat up front (lower than stage level) and the sound lacked fullness. After I moved to further back in the hall the sound improved significantly.
Posted by doctorjohn at 10:40 AM No comments: