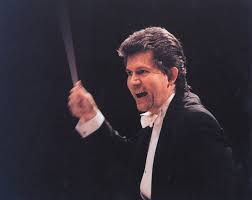 Miracle of miracles! Not a dull moment! If you did not attend last night, do so tonight! Although the raison d'etre for the concert is purportedly Ning Feng's Paganini, for this conductor watcher, the conductor is just as much the star!

Andreas Delfs has appeared with the HKPO before. He is widely acknowledged to have built up the Milwaukee Symphony Orchestra during his ten-year reign (guess who succeeded him there? EdW!) Under Delfs' firm guidance, HKPO last night was like an orchestra transformed. Perhaps they finally got out of their summer holiday mood and realized they had to pay to earn their living, or perhaps it was the telecast! In truth, the chemistry between conductor and orchestra was unmistakable.

The substantial opener was Fandangos by the Puerto Rican composer Roberto Sierra, and what a champion he got in Delfs! The typical pin-point turns, crescendos and decrescendos of the fandango (you may recall Boccherini's quintets) were interlaced with passages of more modern writing. It is a thrilling piece, well rendered by the team, and I want a recording! Below I have embedded a youtube clip of this piece. Enjoy!

Everything I wrote previously about Ning Feng in his recital last year can be used to describe his performance of Paganini Violin Concerto No. 1:

"...here is a virtuoso who uses everything to empower the music, and there's no higher accolade...Ning Feng's beautiful and fulsome tone stood out from the start. Under his fingers, every note retains its full value, a quality rare as hen's teeth today. Add to this phrasing as natural as breathing and a wonderful evening was guaranteed. I fact I had rarely felt so relaxed and satisfied at a concert...In my book, the unassuming Ning Feng catapults to the top of the heap, and needs to yield to none. Other favorites that I like to watch are Augustin Hadelich, Ryu Goto and Hilary Hahn..."

Aside from a tendency to slow down in the cadenzas' passages of lower register, the awesome pyrotechnics served the music well. Here the conductor must also be given full credit for the remarkably nimble accompaniment. Delfs urged and honed the reduced orchestra to breathe in sync with Ning Feng, displaying a technicolor give-and-take that gave the music stature. Compared to the somewhat clumsy Ning Feng, the energetic and slim Delfs, with his grimace and occasional podium antics, seemed to resemble more Paganini!

Truth to tell, despite all the brilliance, this command performance does not completely erase memories of the 2008 performance by Ryo Goto. How lucky we are, to have heard them both!

A pungent Beethoven's Symphony No. 7, more Apollonian than Dionysian, concluded the marvelous evening. The concert is titled "Apotheosis of the Dance", but for those who preferred their 7th lithe and more stately, this Seventh may not comply. For myself, I found the interpretation fresh, shedding light on its relationship with the dramatic elements of the Pastorale as well as the earthy Eighth that followed. The muscular reading, with strong accents and finely graded dynamics, was built on a solid sense of rhythm, and their were moments of great tenderness, such as the opening of the second movement. A less antiquated kind of dance, if you will. The reading easily surpassed EdW's reading with the HKPO when he first came on board.

Except for the fact that I find Michael Wilson's oboe often stolid, the orchestra played very well. Maybe Delfs is the kind of "orchestral builder" we should have! Someone who extracts discipline, but, instead of just delivering the notes, also makes the concert fun!

Posted by doctorjohn at 8:47 PM No comments:

For some reason, the Shenzhen Symphony loves to program the Shostakovich Violin Concerto No. 1. Just three months after the forgettable performance by child prodigy Gao Tianyang came this much better performance by Singaporean Ning Kam.

The press release touted the tone of her 1793 Storioni. Indeed, her tone was surprisingly beautiful and supple. More importantly, commitment and temperament were evident from the first note. In the rapid passages, I felt she short-changed the notes a little too much in exchange for a lighter dancing-on-the-strings feeling, and the fully macabre nature of the work was again not brought out in full, but it was a winning performance. The audience loved her and her Gershwin encore.

This was the second all-Shostakovitch concert I heard under Ehwald. The previous one in 2009 featured the same concerto, given a stunning performance by Antje Weithaas, still the benchmark! This time the Symphony No. 8 was played with some of the same quality as the previous No. 10, and I quote myself:

"...A similar Germanic resilience pervaded the symphony...The complete grip of architecture and non-sentimental approach reminds me of performances of the several Shostakovich symphonies that I have heard conducted by the excellent Gunther Herbig on record (Berlin Classics; available in the library). As in the concerto, I'd prefer a little more abandon and sardonic wit. The orchestra tried very hard, but their grasp of Shostakovich, in contrast to Brahms, was not quite that of the HKPO (in performances by the likes of Jaap Van Zweden and Mark Elder and I now add Lazarev)..."

In Ehwald's hands, the inner movements fared better than the outer ones. In fact, in those movements the playing had quite a bit more bite than the previous No. 10. In contrast, the outer movements seemed a little plain. The SZSO could do better in Shostakovich, as evidenced by the brilliance of Zhang Guoyong's No. 15 and Fred Buttkewicz's No. 11.

I must cite the astonishingly virtuosic playing of the percussion section. That lady bass-drummer was perfectly in sync with the tympanist. Thrilling!
Posted by doctorjohn at 8:06 PM No comments:

Whether Edo de Waart is a great conductor is controversial. If you ask me, he is a good conductor, but over-hyped (only in HK) and not at all a great one. He has been promoted as an "orchestral trainer", but judging from the performance of HKPO in this concert (the playing of the Renes concert was not great either, mind you), that is an even greater fallacy. Would an "improved and trained" orchestra struggle so hard technically in the Honegger Pacific 231? The piece lost all of its brilliance.

Despite the lacklustre strings, Haydn Symphony 103, the Drum Roll, fared much better, better in fact than the Jupiter a week ago. Young, and very boyish looking, Ainars Rubikis has the full measure of this symphony, gave it good shape and managed some good pin-point turns, but overall this was not as much fun as the work Ton Koopman, not to mention Nicholas McGegan, did in similar repertoire.

Dvorak Symphony 7 was given a most "symphonic" reading, tight and at times exciting, but the reading lacked the genial and natural feeling, as well as perfect playing that Lu Jia achieved previously.
Posted by doctorjohn at 8:17 PM No comments: