Jaap programs more or less the same things in HK and in NYC, and so this NYC Bruckner's 8th was preceded by last year's HKPO concert (which I did not attend). Pianist/Composer Conrad Tao had appeared before in HK. This night premiers his newest commission, a sort of appendage before the start of Bruckner's 8th (for details, see the NYT review).

Everything Must Go uses the same orchestra as Bruckner's, with a third harp (desired by Bruckner) and extra percussions. It is fine by itself, though I do not find it particularly relevant. It ends quietly as the Bruckner begins.

As in many other Jaap concerts, as well played and meticulously dissected and planned as the Bruckner 8th is, it lacks mystery and grandeur. The first two movements fare better. I find the slow movement singularly lacking in feeling and the finale has no apotheosis. The low brass is awesome, probably the best I have heard - indeed organ-like. But I have trouble with the coarse tone of the horns and Wagner tubas. I miss Philip Meyers and I think the horn section was much more musical under his leadership.

The audience went wild, but I was non-plussed.
Posted by doctorjohn at 10:49 AM No comments:

Downtown Flushing is now basically a large Chinatown. Culturally speaking, Queens has always been lacking in comparison with other outer boroughs, like Brooklyn. However, occasionally, there are some worthwhile events. 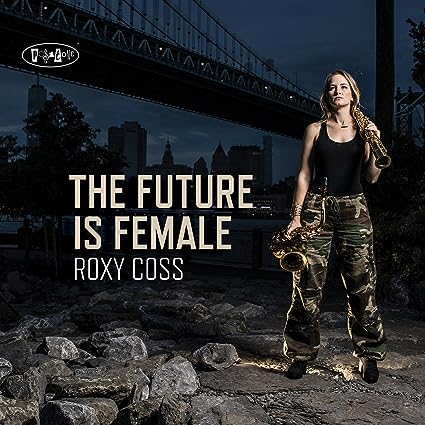 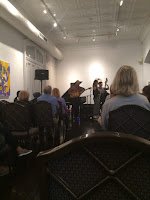 The Flushing Town Hall has particularly interesting jazz events this year, especially its Lioness series showcasing women artists. First up was Roxy Coss (event listing), an accomplished saxophonist and composer noted for her stand on gender equality in jazz (see her Blog).

The band played only Coss' original compositions, and they were varied and interesting, particularly the rather "progressive" (rhapsodic and dissonant) number composed after the election of Trump, which is on her latest album, The Future is Female (allaboutjazz review). Her sax sound has finesse, and is rich toned and powerful. I particularly enjoyed the sophisticated guitar playing of the other lead, guitarist Alex Wintz. Bassist Rick Rosato plays soulfully. The small gallery (L-shaped) is nice but I found the sound mix to be a little bass heavy, and the guitar and bass overwhelms the excellent piano playing of Miki Yamanaka, who can only be heard well in her few solo's. The drums of Jimmy McBride were rather too literal to my taste. Overall, the quintet makes great music, and the $5 admission was hard to beat! I am going to other events in this series! 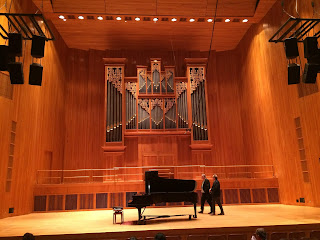 Wonders never cease! Here is a Danish pianist (also composer) who has been completely off my radar; indeed even Google does not tell you much. And yet, this is one of the best piano recitals I have heard.

Right from the declamatory start of the Bach Partita No. 2 one knows this is a pianist of substance. Dramatic, finely spun, yet with nothing forced (an absolute no-no in Bach for me), the opening set the tone for the piece. the dance rhythms are naturally rendered, yet at times spontaneous and almost jazzy. The counterpoints and the balance between the two hands are always perfect. This is Bach playing of the highest order, and I have never heard better, live or on record.

The Beethoven Op 111 is equally awesome, opening also in a dramatic declaration. Sivelov's excellent technique ensures there is no ugly struggle, yet the uncommonly inventive music is deeply probed and hugely satisfying. The program I have to say is highly intelligent, and his playing makes us aware of the dance and jazzy elements common to both pieces. Bravo!

After a brief intermission, Sivelov plays a group of Scriabin, Sonata-Fantasy No. 2, Deux Morceaux (Op 57 and 59), and Feuillet d'album, Op 58. which are all rendered with the utmost color; the sometimes abruptly shifting vistas always sound interesting and never drifting, as they can be in lesser hands. The last piece was stirring account of Bartok's Sonata. As before, Sivelov's rhythmic command is unassailable.

The pianist is a bit of an eccentric (perhaps that accounts for his obscurity). His soft shoes do not go with his tux, but one understands why he wears them, as he is prone to tap on the floor. Even more unusually, he vocalizes extensively, but the sounds are not the usual sing-along type (Glenn Gould), nor moaning (Keith Jarrett), rather hoarser and closer to hissing and forceful exhalation. These antics can be distracting, but I'd gladly put up with them when the playing is on such lofty grounds.

This was a free lunch time recital on campus; the small LeFrak Hall is beautiful and cosy, and acoustically excellent. The program is going to be repeated at Town Hall today (also free); I almost feel like going again.

Posted by doctorjohn at 11:12 AM No comments:

The Flushing Town Hall is a historic building that presents cultural events at affordable prices, focused mostly on upcoming ensembles in Jazz and World Music.

The ensemble is a Chinese government sponsored institution. While the music and dance are undoubtedly authentically Mongolian, the choreographed presentation is not without influence from the Soviet (Chinese) and other models. Indeed some numbers could pass for Russian folk dance or flamenco! World Music indeed.

For description of the program, read this cached link. From internet pictures it seems the ensemble is larger that what we saw on the day. Despite the small stage, the dancers gave energetic performances, and the band was excellent. It was hugely enjoyable and the audience (few Chinese) was highly enthusiastic.
Posted by doctorjohn at 5:57 AM No comments: