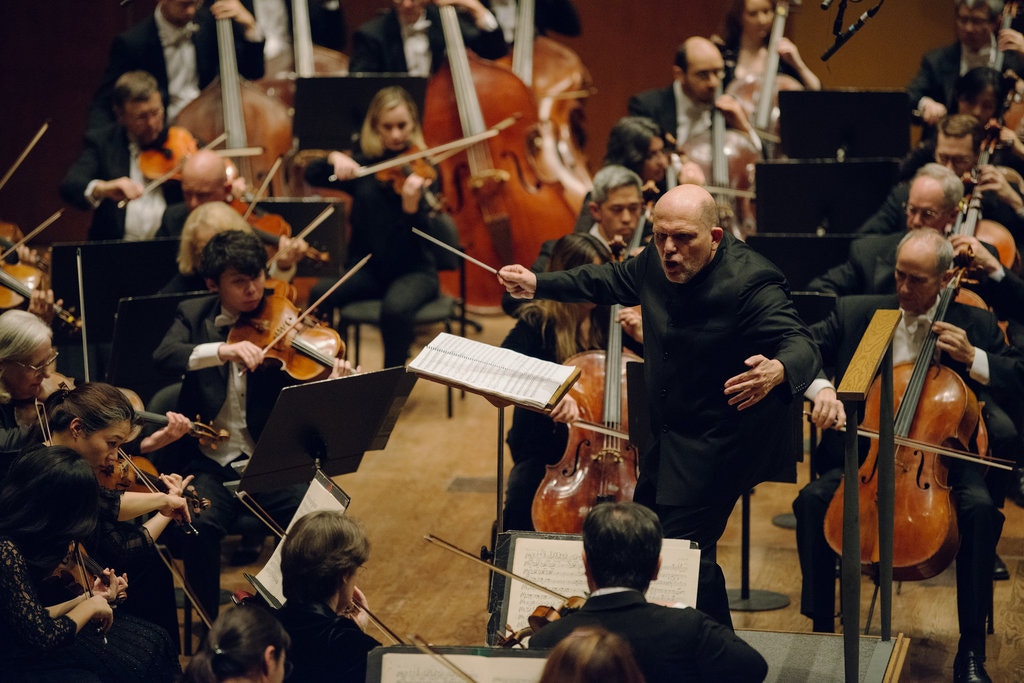 What a tough program for the musicians! I have to say, this was the most committed playing by the NYPO I have heard in a while.

Concert opened with Britten's Violin Concerto, ably played by Dutch soloist Simone Lamsma, whose CD's (Challenge) I have enjoyed. Both soloist and orchestra delivered idiomatic playing. However, for me Lamsma's tone on her strad, particularly in the midrange, was on the lean (though not gritty) side and not fully fleshed out, which does not matter that much in this piece.

The mammoth Shostakovich Symphony 7th received a gargantuan performance. The loud passages were truly epic, graphic, and terrifying - they made me uncomfortable, which was the purpose. Most gratifyingly, Jaap maintained a good flow and navigated all the transitions well. The musicians played wonderfully. The woodwinds with character, the brass fiery and strings penetrating. Perhaps the elegiac aspects of the score could have been brought out more, but I was involved.

There was tremendous applause at the end, but I somehow felt perhaps one should not. I had thought that there must be people in the audience who have lived through the siege of Lennigrad. I noticed the old lady close by did not clap, and so I said what I was thinking to her, and she replied: "...you know, I was there...". A poignant moment that attests to the success of the performance.

NYT Review
Bachtrack
Posted by doctorjohn at 9:58 PM No comments: 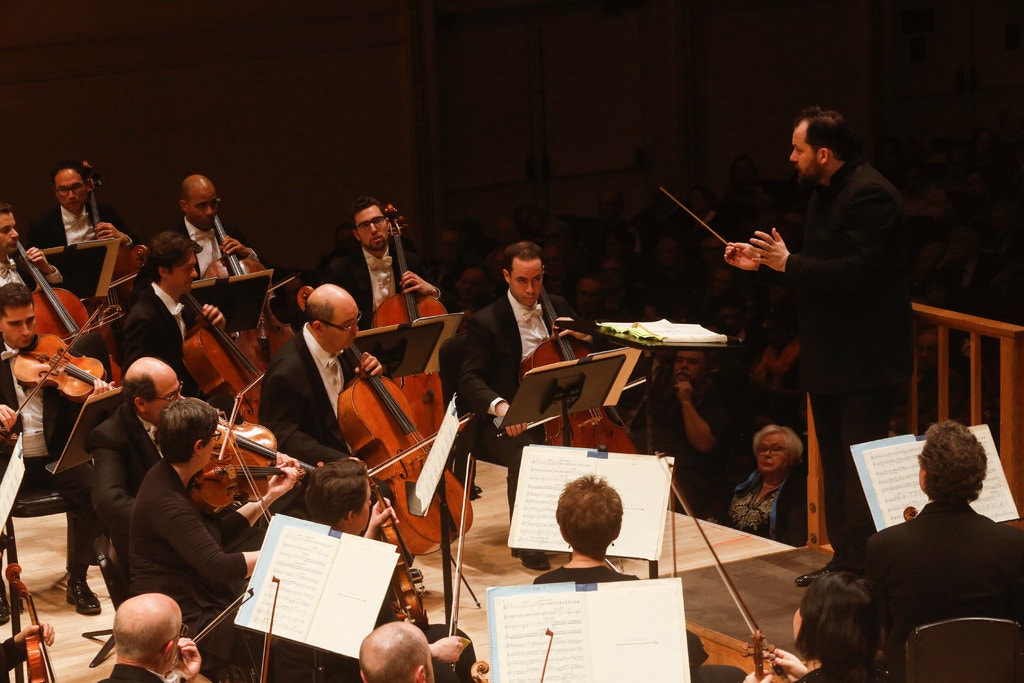 The program is hinged on one thing: the trumpet. Andris Nelsons, the new BSO director and in hot demand elsewhere, was a trumpeter.

So it was not surprising that he programmed HK Gruber's Aerial, a trumpet concerto. As usual for this composer, the piece was stylistically all over the map. See the reviews on the same program in the Boston Classical Review and New York Times.

The Mahler 5th of course opens with a trumpet solo. I agree with both reviews that the Mahler was kind of disappointing. While I enjoyed very much the quality of playing, I too often found the lines sagging and tension wanting (particularly in the Finale).
Posted by doctorjohn at 9:22 PM No comments: They played mostly original compositions by Monaco, very much like reported here (though personnels are somewhat different). Unlike Roxy Coss, the style is straightforward, and Monaco was almost subdued, with brief soloing and mostly back up playing, ceding the spotlight generously to others, particularly Lauren Sevian, most unusually playing baritone sax exclusively. The rhythm was steady and nothing sounded edgy. Both drums and organ fit snuggly into the picture. The sound is harmonious (not so easily achieved, believe me) and I enjoyed it a great deal.
Posted by doctorjohn at 9:02 PM No comments: I went to this concert for a single reason: I am a fan of Chausson, and it is a rare opportunity to hear his work. My view of the concert does not differ so much from the Philadelphia Inquirer review of the same program a week before (where the pic also comes from). Poeme de l'amour et de la mer was ravishing and hugely satisfying, though I do think DiDonato's French enunciation could be improved upon.

The program was intelligently planned. The first half opened with a well played Prelude to Act I of Wagner's Lohengrin, surely not unrelated to Chausson. Then came a relatively new piece (first premiered by CSO in 2014) by new music darling Martin Bates, Anthology of Fantsastic Zoology, a pictorial painting (tone poem really) of Borges' work of the same name, which depicts a succession of fantastical and imaginary beings. There were many shifting moods, and the playing was marvelously coordinated and the sonorities interesting. However, I happen to be well acquainted with Borges' writing and don't think the score was that successful in capturing the fantastical.

The second half closed with Respighi's Fountains of Rome. Yet again, I fail to be drawn into this composer's world. The reading was very good but not enough to transport me.
Posted by doctorjohn at 7:56 PM No comments:

Keyboard Virtuosi today are a curious breed. Eager to sound more modern and different, yet longing also to belong to the romantic tradition, they frequently court controversy and put themselves as well as their audience into a conundrum.

In the case of Matsuev, there is another dimension. Like Gergiev, he is deemed by some Russian expats (likely Ukrainians) as a Putin Puppet - indeed there was a small demonstration against him right outside Carnegie Hall (Gergiev had received this treatment many times in NYC). They were a minuscule minority, as inside the venue there was a Russian diaspora, ney, occupation - I heard a lot more Russian than English.

There has never been the least bit of doubt on Matsuev's keyboard prowess, but questions about his artistry persist. I have known him through his mostly excellent concerto recordings with Gergiev on the Mariinsky label, but this is the first time I have heard him in person. Judged by this concert, he is definitely a titan capable of making truly colossal sounds, likely unrivaled (with all due respect to Freire, I'd have liked to have heard him playing the Brahms with Gergiev; see last post below). However, his affinity for composers seem to vary a great deal, and not all interpretations were successful.

The openers to both halves were not too successful. Beethoven's Op 2/3 is not an easy sonata to bring off, and Matsuev's rendition came off as highly idiosyncratic rather than personal and memorable. The disjointed first movement aside, the adagio was an attempt to create profundity, with only intermittent success; whereas the scherzo and finale's gaiety came across as forced. Chopin's Ballade No. 4 was more rounded and sometimes rousing, but it was fragmentary, a common failing in this genre, and Matsuev failed to rise above it.

The Chopin was followed by Tchaikovsky's Meditation, well played and with a touch of regret. The following Prokofiev Sonata No. 7 was sweeping and superbly executed. For me, the complete lack of struggle and total command of sonority (no acerbic sound allowed) sometimes worked against the work, but it was quite a performance nonetheless.

However, the crown jewel was what ended the first half, a magisterial rendering of Rachmaninov's Variations on a Theme by Corelli, which in lesser hands can be an utter bore. Uncommonly lucid and perfectly balanced, Matsuev revealed more of the work than anyone I have heard on record. Indeed, he made it appear not so far off from one of my favorite orchestral works, the Symphonic Dances. Whereas elsewhere (like in the Beethoven) his astonishingly powerful left hand can actually blur the inner voices, in this work he used it judiciously and coloristically, giving shape and a high degree of coherence and symphonic grandeur. A brilliant achievement, and one of the very best Rachmaninov, or any piano playing, I have heard. That alone was more than worth the price of admission.

Matsuev was straightforward in manner, walking briskly to and from the piano and giving a string of encores without prompting, though the wildly adulating audience could have gone on forever in applause. Five encores were performed, the best to me a touchingly simple traumerei.

Posted by doctorjohn at 8:00 PM No comments:

Valery Gergiev and the Mariisky Orchestra seldom disappoint on record, but it is less common to hear them (on record) do non-Russian works. Gergiev has always had an affinity for German works, and is in fact now director of the Munich Philharmonic.

The swift opening of the Brahms Piano Concerto No. 2 made clear it was not going to be the typical romantic reading. Indeed the string sonority was a little grainy at first. Like on records (mainly their own label), the orchestra just came across as occasionally coarse, but the sound certainly smoothed out as the piece went along. In the slow movement, the solo playing were memorable.

This piece is one of Nelson Freire's calling cards, and he had recorded an excellent version for Decca (still a benchmark). More than ten years on, he looked a little frail, his playing remained elegant, beautifully proportioned and fresh sounding, full of details which never stuck out. However, although he could still sound big, the piano tone was inevitably somewhat light, which disadvantaged him in tutti as he got covered by the orchestra. Most of the time however, Gergiev kept the balance and reined in the orchestra. Overall, stylistically this performance did not gel like the rapturous rendering delivered by Leonskaja/Fedoseyev in Shenzhen earlier this year (entry here). The Gluck/Sgambatti encore was ravishing.

Strauss' Ein Heldenleben, likely more suitable to Gergiev's style, has been in Gergiev's active repertoire for a while. His recent recording with the Munich PO (on their own label) has received great acclaim (a youtube snippet here, and the whole is also available), and so it was not surprising to find this performance full of rigor and, yes, majesty. Gergiev has always been dramatic, but he has never been pompous nor bombarding, and so it was here. The orchestra delivered playing of the highest order - the strings now sounded powerful but smooth and expressive; the winds, particularly in their characterizations of the "Hero's Adversaries", utterly pungent and characterful; and, my, the brass - powerful, yet golden and noble! All sections were vividly drawn out - the "Battlefield" rhythmically delectable; the "Companion" loving; but the most impressive was the long last section, "Hero's Escape from the World and Fulfillment", which most often receive performances that do not match the title - here it did in spades, as the music conveyed a rare nobility.

Incidentally, the musical Concertmaster, Lorenz Nasturica-Herschcowici, appears to be hold the position in both the Munich PO and Marriisky Orchestra.

As if that were not enough, for an encore the triumphant end of Stravinsky's Firebird was delivered with the same majesty.

Posted by doctorjohn at 11:44 AM No comments: