The concert opened with the Brahms Symphony No. 3, given a stylish and muscular reading, typical of conductor Andreas Delfs. The playing was very good, and if a little wistfulness was missing, it was made up by the cogency of the reading.

Second half's Beethoven Violin Concerto received a miraculous reading. Frank Peter Zimmermann, always a thoughtful musician, was in top form. Rock solid technique that filled the hall was not everything; more precious was the spontaneity he managed to display in this warhorse which he plays often. His phrasings never sounded studied or routine, and if occasionally the forcefulness jolted me a little I was wonderfully refreshed. His Strad, ex Kreisler, sounded magnificent in tonality. Delfs proved a worthwhile partner; the orchestra and conductor both engaged in a musical dialogue.

The best Beethoven I have ever heard with the HKPO.

Posted by doctorjohn at 5:03 PM No comments: 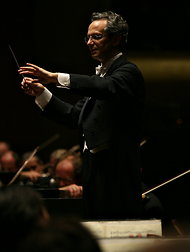 Much as I admire Fabio Luisi, I almost decided not to attend this concert due to over-exposed material, especially during this Beethoven year. I am glad I went.

I have heard a few CDs of Lise de la Salle from the library, but nothing prepared me for how fresh/willful the electrifying interpretation of the Rachmaninov Piano Concerto No. 2 was. She has a big solid technique and I could hear her clearly even when the orchestra played quite loudly. It was not a "traditional" interpretation, but a fresh and spontaneous one. Luisi was a marvelous accompanist, with her all the way, and the interplay between soloist and orchestra was palpable. The crowd went frenzy with applause.

The Beethoven Symphony No. 7, like Andreas Delfs recent performance with the HKPO, received a tightly driven reading, but Luisi found more poetry in the allegretto. The central European sonority of the orchestra was simply a delight for this listener. What characterful winds and brass!

Due to personal engagement, I missed the first half, but enjoyed the Brahms Symphony No. 2 immensely. the interpretation was perhaps idiosyncratic, but it was passionately delivered, a refreshing change from some of the bland Brahms we get these days. Remember Karl Bohm? No one was more authentically Austrian than him, or had direct ties to Brahms, yet his recordings are idiosyncratic to say the least. The meaty texture, with a heroic bass line, was opulent, the playing full of memorable moments. Passionate, yes, that is how Brahms should sound like!

The last time I heard the VSO was in the eighties, in a concert at the Musikverein conducted by then-director Rafael Fruhbeck de Burgos, a solid musician, yet I think this current incarnation is better, and has a prominent future with this exciting conductor at the helms.

This is one of my favorite polkas, which Luisi offered as a rousing encore. Here are youtubes of the earthy Carlos Kleiber (Bavarian SO 1986) and more suave Karajan (Vienna PO 1987). I could not make up my mind which I prefer. Luisi's interpretation was closer to Kleiber's in temperament.

Posted by doctorjohn at 7:52 PM No comments: 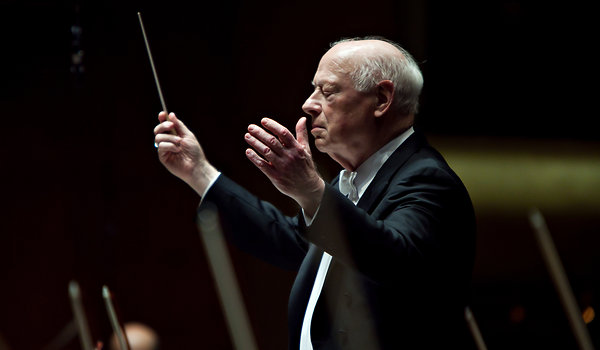 Ever since I first heard Bernard Haitink with his Concertgebouw Orchestra more than three decades ago, I have loyally followed him. Here is a musician who balances the orchestral sonority meticulously, even in odd works like Berlioz' Symphonie Fantastique, to let you hear through the transparency and discover things you have never heard before. In concert he often proved more exciting than on records. The Mahler 6th played in Carnegie Hall when he led the Berlin PO on a New York tour in June 1991 (the concert calender of New York Magazine of that week is amazingly archived on the internet) has remained central to my concert going experience, on par with the unforgettable Karajan performance in the same hall in 1984 (coincidentally cited in this 2009 review of Haitink's Mahler 9th with the LSO).

So I was happy I finally caught up with him in NYC. His appearance with the NYPO was unusual to say the least. The NYT articles said his last appearance was in 1978 but did not mention why he had not returned till now. In the program book, there was a candid interview in which Haitink basically said things did not click then. Although regrettably no Mahler was offered, compensation came in the form of Bruckner 7th.

In Strauss' Don Quixote, a score I love dearly, I particularly enjoyed the playing of cellist principal Carter Brey, who delivered a beautifully full tone, and I feel he is a much stronger soloist than his predecessor, Lorne Munroe. However, I do feel the playing by the orchestra in general lacked Straussian swagger and opulence; perhaps the Philadelphia or Chicago would be more interesting in this work.

Beethoven's Pastorale was beautifully balanced, permeated by a firm pulse, and Haitink coaxed an almost European sound out of the NYPO. Very satisfying. The audience gave him a great ovation, as he deserved.

Like the NY Times reviewer, I much enjoyed the Haydn Miracle, but did have the same thoughts about period practice, and recalled the wonderful performance by McGegan in HK.

The towering Bruckner Symphony No. 7 triumphantly rounded out my Haitink re-encounter. It sounded closer to his earlier studio recordings than some of the more recent and more spontaneous live accounts. The reading flowed inevitably and the NYPO have always been a good Bruckner orchestra. I hope to catch up with Haitink again soon.
Posted by doctorjohn at 6:48 PM No comments:

Excellent music-making by these two musicians from the UK. The program bears an uncanny resemblance to the HKPO's program for January 2006, conducted by Osmo Vanska, but played in reverse order.

Beethoven's Pastoral received an enjoyably muscular and straightforward reading by Mark Wigglesworth, who became known to the record collector because of his Shostakovich cycle on BIS (12 years in the making; recently concluded). Playing of the HKPO was very good, and Wigglesworth's conducting was notable for his firm pulse and good rthymic control. In comparison, the reading by Vanska in 2006 was more elastic and consciously shaped.

Paul Watkins may be more familiar to us as cellist of the Nash Ensemble rather than as soloist. For a consummate chamber musician, his tone was surprisingly big and full. Wigglesworth proved equally adept as accompanist, and the collaboration resulted in the best Elgar Cello Concerto we have heard from HKPO. The interpretation heaved and sighed, wistful and exciting at turns, and was well knit. It all sounded quite familiar - we were certain it was closely modeled on the immortal du Pre/Barbirolli recording, but who cares! In 2006, the Elgar was unsatisfactory due to the weak soloist, Trey Lee.

The concert concluded with Wagner's Tannhauser overture. The HKPO tried hard but could not quite convey the lustiness of the score.

Posted by doctorjohn at 8:43 PM No comments:

Here I belatedly wish readers a happy new year and thank you for your support during the past year. I have been kept quite busy for the last months, and have delayed writing up several concerts that I have attended both in HK and NYC. That was quite uncharacteristic of me, and I hope this kind of delay shall be kept to a minimum this year.
Posted by doctorjohn at 8:37 PM No comments: