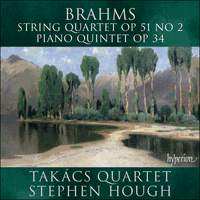 Good:
I have long been a fan of the original Takacs Quartet (on Hungaroton). Today it is international rather than Hungarian (on Hyperion) and it shows in the playing. While Edward Dusinberre is refined and the overall playing is still dynamic and spirited, the ensemble lacks weight and is less tonally blended than before. Brahm's String Quartet No. 2 comes off better here. Although a little studied, it is fastidiously detailed, with moments of springing rhythm, almost enough to offset the smaller scale (I prefer bigger-boned Brahms). The piano quintet is a more curious affair. It is a widely dynamic reading that scrutinizes the dynamic markings. It is not a bad reading, but it lacks true passion (like the Budapest/Serkin on Columbia/Sony). As before, I am not enamored of Stephen Hough's Brahms playing, rather clanging in sound and lacking in tonal heft.

Boulez and VPO in Bruckner's Symphony No. 8 is certainly a curious affair. This recording has been widely hailed. I do like many details here and there, but overall I just don't receive the grandeur inherent in the Brucknerian ebb and flow. Most unfortunately, the sublime adagio is rather devoid of sentiment. I listened to the Japanese DG and sound is not great.

Fair:
Judged by this compilation of Bach's own transcriptions and reconstructions, I don't understand why Akademie fur Alte Musik has made a reputation for themselves. The playing is excellent but rather metronomic. In these familiar works (albeit in other guises) this just doesn't work.

Even more curious is Mahler Symphony No. 5 as played by the San Francisco Symphony under Michael Tilson Thomas (from live sessions). The SACD sound is excellent but I have to agree with some Amazon readers that the playing of the SFSO, although detailed and accurate, is not in the top echelon, nor for those used to more idomatic Mahler playing (like the Concertgebouw, even NYPO and CSO). MTT's conducting is rather free-wheeling, and there are passages that sound spontaneous and interesting. However, this is certainly not a coherent reading and much of Mahler's grandeur and nightmares are missing in equal measures. This is the first MTT Mahler I have listened to.
Posted by doctorjohn at 8:42 PM No comments:

In the last forty days I had been going back and forth between HK, Taipei and Fuzhou (mother's birthplace). Yesterday was my first real free day. From the Tsuen Wan library I obtained a stack of expensive (SA)CDs and settled down for some serious listening.

Excellent:
Dutch PENTATONE, in association with Dutch POLYHYMNIA, has been issuing a hugh number of SACDs, many in multi-channel. All their own DSD recordings that I have heard have excellent sound, though one may debate on their artistic merits. But they do have a stable of excellent musicians, like Julia Fischer, to cite just one. Pentatone has also been re-issuing older analogue PHILIPS recordings that have originally recorded third (and more) channels, but I'd skip those.

Slowly but surely, Pentatone is half-way through the Shostakovich cycle, all featuring the redoubtable Russian National Orchestra conducted by different conductors. From the two releases that I have heard, they are top-choice material, from both musical and sonic standpoints. I suspect the RNO is incapable of delivering boring Shostakovich.

Interestingly, although produced and recorded by the same team, in the same Moscow venue, the Jurowski recording has notably better sound. Fortunately for us, the interpretation is excellent. This is the first Jurowski recording that I have heard and I am really impressed. Music Web International has an excellent review that makes a great read. If the Shostakovich Symphony No. 6 does not eclipse memory of the magisterial live account delivered by HKPO/Elder recently, it does dig deep and have exemplary patience and control. I am even more impressed by the Symphony No.1, here given real gravitas by Jurowski that to me sheds new light on this early work. Jurowski's explored everything yet knit everything tightly together, remarkable for a young conductor! The RNO have this music in their blood and play magnificently. Recording is demonstration grade. I'd love to hear a multi-channel demo.

Symphony Nos 5 and 9 are conducted by Yakov Kreizberg and have received much critical praise. Perhaps because I am just a little jaded by the over-abundance of Shosty 5 (live performance and recordings) around I am less enthusiastic. This does not mean the interpretation is not good. On the contrary, it is excellent. Just to give one telling example: although the inner movements have about the same timing as Haitink/Decca, they feel more deliberate. This is because they are highly sculpted, with rhytmic emphasis that serve to impart feelings of gawkiness and, hence, protest under the jubilant surface. If you don't have a recording of the fifth, this is as good a place to start as any. The coupled No.9 (a difficult one to render right) receives yet another superbly structured reading imbued with gravitas, although the first movement does not have quite the effervescence (rightly or wrongly) of Inbal/Denon (also on Burmester CD2!).

Onto Mahler Symphony No. 1, not THAT hard to bring off but not that easy to achieve true distinction. Here are 2 live recordings. The Concertgebouw under Mariss Jansons (RCO; from the booklet, patched from 2 separate occasions) play perfectly (how can they not?) and Jansons has great structural integrity and precise articulation. Sonics too is excellent (also done by Polyhymnia), yet with all that to its credit, the recording misses just a little the all-encompassing quality that Mahler speaks of. "...the symphony must be like the world...it must contain everything...". Judged by Mahler's own words, which is as it should be, EdW's Mahler world mostly comprise only notes, sometimes with no apparent link nor direction; Jansons world has all the notes, much of it purposeful. But in Tennstedt's world (as in Kletzi/EMI) one feels a sense of journey. I prefer the Concertgebouw's playing to the Chicago, but under Tennstedt in this live recording one can feel the tremor in the heart, the calling out, the world. This live recording is only available on Japanese EMI TOCE-13107. Grab it ASAP. The sound is not as resplendent as the RCO release, but still very good. Warning: not for those who dislike slow tempi.

Good:
Much as I love Barbirolli, BBC Legends is scrapping its barrel in the issue of Beethoven Symphony No. 5 and Shostakovich Symphony No. 5, both with the Halle. The Beethoven is good but not as distinctive as his EMI Eroica. The Shostakovich is a Barbirolli curiosity, well played but not competitive today.
Posted by doctorjohn at 7:56 PM No comments: 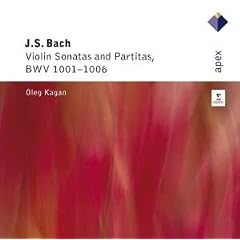 Time flies. I have been so busy with family matters that I was a little shocked to find that my last log was published almost a month ago. Here are a few CDs I bought or heard in Taiwan. I can only play them on my cousin's computer.

Excellent:
Bach's solo violin works are of course essential library material. After listening to recordings of the greatest violinists, like Milstein and Heifetz, sometimes it's not easy to find newcomers that one likes. This Oleg Kagan Erato recording, long out-of-print, is now re-issued by Warner Apex, 2 CDs for the price of one. Surely a collector's item, so grab it ASAP. This is from a 1989 live concert at the Concertgebouw, and the playing is magnificent, full of humanity. It witholds comparison with any, marred only by an over-reverberant acoustic, but afficionado's would not mind. 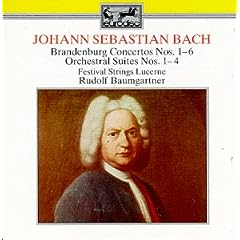 Even more than the solo violin works, I love the violin concerti and avidly collect different versions. This DG recording by Francescatti I already have, but when I saw the Japanese pressing (JS Bach 名盤 1200) I just had to buy one. His tone in this 1971 recording is warmer than on some Sony/Columbia recordings. Both the soloist and orchestra play and breathe together in long lines. Despite "period practice", the style here, in long singing lines, cannot be faulted. Let me add here that I have always admired the Lucerne Festival Orchestra under Rudolf Baumgartner. They have made many great discs together and their set of the Brandenberg Concertos and Orchestral Suites on Eurodisc/RCA is still top choice, and no-brainer at budget price. Don't forget, this festival orchestra, though ad hoc, has many famous soloists on its roster and had played under Furtwangler!!

While browsing at Tachung Records in Taipei, which has an excellent audio system, I was tansfixed by this hot Nonesuch (Warner) release of the Beethoven piano concertos. I actually stayed for more than 1 hr listening to the remarkable partnership. Richard Goode's pianism is spontaneous, with great tonal allure, and impeccable in its classicism. With pianism of this order, it's easy to slight the orchestral contribution which, in these of all concerti, are just as vital. I have always loved the sound of this Budapest Festival Orchestra under Ivan Fischer. One admires the beautifully phrased lines and the singing quality. The recording quality is excellent. While here, I should also mention that I recently heard the Pletnev cycle with the Russian National Orchestra on DG (mid-price). Pletnev's playing is cooler and more yang than Goode, but just as immaculate and fastidiously weighted. Highly recommended. I'd get both cyles.

Very good:
I was surprised to see this Janos Starker Cello Sonata cycle, originally issued on Erato and long oop. Now re-issued by Warner Apex, it's eminently worthwhile. The readings are "objective" and straightforward (as always with this cellist). The piano is balanced to the fore but Rudolf Buchbinder's somewhat dry style, with little pedaling, helps the integration much. The recording quality is excellent. Starker admirers need not hesitate.

Why is Beethoven worthless? Because all these Beethoven issues are being sold at bargain price. None of the new Beethoven piano concerto cycles are full price. I haven't heard the newest Pollini and the Kissin cycles.
Posted by doctorjohn at 10:01 PM No comments: