Sergio Tiempo is a young pianist who travels in the inner circle of Martha Argerich (which also includes sister Karin Lechner). I have had generally favorable impressions of his recordings, particularly those from the annual Lugano Festival's "Martha Argerich and Friends" (EMI). And so I had high hopes for this recital, which were unfortunately not realized.

The opening Bach Partita No. 1 was a curious affair. There was absolutely no line to speak of, but neither was it pulled around to make a romantic point. The piece just sounded plainly chaotic. The ensuing Haydn Sonata No. 50 fared better.

Just when I thought this pianist would like to pull things around, he lauched into a ferocious and coarse (but straightforward) Chopin "Revolutionary" Etude, Op 10/12. The three etudes from Op 25 that followed were played straightforwardly but with good sensitivity, attention to details and impressive legato.

After the interval, Ravel's Gaspard de la Nuit was again rather literal. Here, despite the smooth playing, for my taste there was not enough differentiation between the three pieces. Ondine lacked a tingling sensation and Scarbo was too tame. Three of Ginastera's Argentinian Dances were nicely delivered. Concluding the recital were two Liszt pieces. The Consolation No. 3 was nicely turned. The Mephisto Waltz No. 1 is not a piece I like but his rendition was tasteful.

All in all, a mixed bag despite some impressive playing. If I remember correctly, the program had been changed. The originally programmed Prokofiev Sonata No. 7 I think would suit this pianist, and I regret the change.

I also wonder how he fared in Chopin's Concerto No. 1 on Feb 24.
Posted by doctorjohn at 7:48 PM No comments:

After hearing the excellent Chen Sa, who was Crystal Prize winner at the 2005 Van Cliburn, I had high hopes for the same year's Silver medalist Joyce Yang. Alas, they were not fulfilled.

As fellow attendee whlee said, the Rachmaninov Concerto No. 3 should have an opening full of anticipation. Downplaying here was almost an instant deflation from which the concerto never recovered, not helped by the rather directionless playing of the soloist. Tonally rather dry and monochromatic, Yang was mostly strong enough to match the big orchestra but, wiith rare exceptions, there was little sense of give-and-take. Both the soloist and orchestra lacked rhythmic elan, adding up to a rather tepid affair. In her solo moments, whether in cadenzas or the encore, My Joy (Chopin-Liszt), Yang failed to capivate.

Rachmaninov's Symphony No. 2 is a EdW staple, which he had recorded for both Philips and Exton, and this performance was in a similar vein, though not as well executed. After the rather directionless first movement, the more straightforward scherzo and adagio fared better. Again, the lack of rhythmic flair robbed the finale of its sheen. Here, with the brass subdued in their periodic outbursts and the bass lacking in bounce, it was left to the strings to impart some brilliance. The whole was disappointing

Overall the orchestral performance was quite below the level they had achieved in the last few concerts, and I felt even EdW's conducting was below his own average. Perhaps the China tour had taken its toll.
Posted by doctorjohn at 8:32 PM No comments:

I sat upstairs. If not for the large number of (surprisingly well behaved) students it would have been fairly empty. The less-than-ideal attendance can be attributed both to the unusual program and to the relatively low profile of the quartet in the music world. They deserve more.

The quartet played without a score. I read from the net they even played standing up before. That's commitment! And that is fully reflected in the excellent playing.

Program opened with a minor Mozart in G, K156. It was a rather free interpretation, pulled to probe hidden depths, with only intermittent success. Although sometimes mannered and phrasing lacked Mozartian grace, it was apparent the quartet excelled in ensemble. Thomas Zehetmair was sharp, muscular and gratifyingly steady in intonation. Violist Ruth Killius was really dynamite, with a big and varied tone that was always ready to point a phrase. Cellist Ursula Smith was also excellent, though taking rein less often. Although a very fine violinist, Kuba Jakowicz was a little too reticent for my taste, only heard mostly in inner voices.

Ensuing was a rarity in concert, the Hindemith Fourth Quartet. This more structured piece showcased the quartet's high degree of finish in ensemble and straightforwardness. I enjoyed it immensely, even found the central slow movement strabgely beautiful, though I'd not be surprised if most people found it rather dry.

The quartet is perhaps most famous for its Schumann, and they certainly showed why. The Schumann quartets can sound meandering in lesser hands, but this ensemble certainly injected purpose and momentum into the proceedings, and just would not let your mind wander off (a friend complained the scherzo was too fast). While they did not really pause much to smell the flowers, neither did they slight style, bringing out moments of Mendelssonian quicksilver as well as Beethovenian gravitas (this is referring to the excellent program note, which mentioned them, rightly for this performance) .

As champions of less played works, it was entirely in character for them to offer as encore the scherzo from Bruckner's (early) quartet. It came as a little surprise that the playing here was fully romantic. That's quite a treat for this die-hard bruckner fan.

Discussing the performances with KL, I remarked to that Zehetmair may be a vegetarian, to which KL answered, "likely practising yoga for concentration!" I think he may have a point there.

For me, this string quartet is one of the best, far outstripping in ensemble the Hagen, Petersen and Emerson that have visited HK. It is very different from the sonorous Borodin, but I find them refreshing.

p.s. Apparently this exact program had been played much elsewhere, and there are interesting and detailed reviews on the net. Click here for a detailed review. Also, Time Out has reviewed the concert.
Posted by doctorjohn at 9:37 PM No comments: 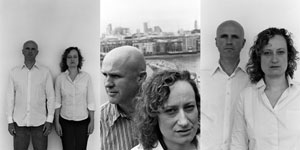 This is likely the most eye-catching theater program in this year's Arts Festival. News From Nowhere is Tim Crouch's Theater Company in the UK that has garnered rave reviews from everywhere they go. England, performed by Tim Crouch and Hannah Ringham, is one of three programs at the Arts Festival.

England is performed in a gallery, Tang Contemporary Art (based in Beijing) in Sheung Wan. I caught the opening performance. The show contains extensive musing on the nature of art, and has a site-specific element. For this performance, it is interaction with the "site-specific architectural installation exhibition by award winning architect William Lim, whose works deal with the uncertainties of life and how the environment can hold a psychological power over us" (Time Out).

Unusually, partly due to its low ceiling, the gallery feels rather cramped, even before the 60 ticket holders showed up. That did not stop me from admiring the installation by Lim. Most impressive were 2 large wooden boxes with doors. After taking off your shoes, you can walk inside, which is completely lined by mirrors. You can watch an infinity number of yourself and wonder about life and death. This is definitely not an orginal idea, but execution of the show in general is clean and strong, the message clear and not pretentious (as installations are prone to be). I urge you to visit this exhibition even if you are not attending the performances. Too bad I cannot find pics on the net. 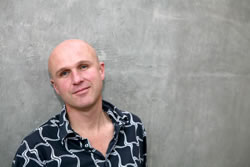 What is England about? It is a metaphor for many things. The plot ostensibly revolves around two people; one a terminally ill person of unspecified sex who is in need of a heart transplant, and the other the art-loving and rich boyfriend. We hear their thoughts in the first part, on themes that range from beauty to death. For this part, the audience stand in the gallery and the two performers occasionally move from spot to spot. After all walking through one of Lim's tunnel-like boxes, the audience is seated for the second half, when the action shifts to a Muslim country where the person who had recovered after heart transplant went to thank the mother of the donor. Unfortunately things are not what he has been led to believe, and how the heart came about suddenly becomes shrouded in deceit and moral bankruptcy.

The "dialogue" between the two actors has an improvised feeling. The way they were delivered, I could have listened all night. Crouch speaks in a fastidious fashion, often lengthening syllables for emphasis; Ringham is more colloquial. Diction is very clear and one is often mesmerized by the cadence as there is a strong rhythmic element to the way they weave in and out of each other. For me, sometimes the counterpoint and even fugues are unmistakably musical in nature and a treat for the ears. I really cannot describe it, but fortunately you can catch a bit of it (and the other pieces) on youtube.

Note that they are performing also in the larger CCCH Studio Theater. I think they are sold-out.

Kudos to both the performance as well as installation.
Posted by doctorjohn at 10:38 PM No comments: