Austrian conductor Johannes Wildner has had long ties with Hong Kong, and should be familiar to many through his early Naxos recordings. On this occasion, his affable manner and musicianship was much in evidence.

Britten's Peter Grimes: Four Sea Interludes opened the program. Although I don't listen much to this piece at home, in the concert hall the colorful orchestration proved quite entertaining. It was not the most atmospheric, but the good playing ensured drama aplenty.

The HKPO has never been able to bring out the flavor in the French repertoire, especially Debussy's works. Although La Mer was reasonably well played and well controlled by Wildner, it felt more Germanic than French. At least on this occasion, things moved and did not become stagnant or flabby.

Brahms is again not a composer the HKPO feel entirely comfortable with, but soloist Garrick Ohlsson and conductor did a magnificent job of collaboration in the Piano Concerto No.1. Ohlsson's playing was outwardly self-effacing, but careful listening revealed a strong personality. His bronze tone, subtle variations of tone color and meticulous balance of chords proved more endurable than what more excitable soloists usually offer. When called for, he hammered it out effortlessly, but what impressed even more was the way he blended into the orchestral fabric in this most symphonic of concertos. The conducting too was magnificent, fluid and urgent when needed. This was not a performance that stressed youthful ardor or attempt to be heaven-storming, but it was ravishing in its maturity - I still savor it as I write! 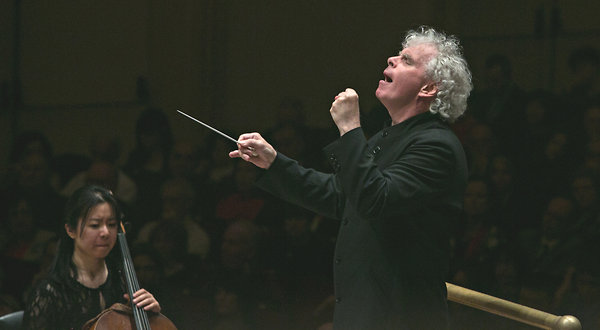 
Every classical record collector knows Simon Rattle from the start of his remarkable career. Long before his ascension to the top post of the BPO, his long tenure with the City of Birmingham Symphony Orchestra (CBSO) was amply and meticulously documented by EMI in a huge body of recordings. Many of the CBSO recordings, such as the Mahler 2nd, garnered rave reviews, and I listened to many of them over the years, but I have to say few really touched me, and as a result I never scrambled to hear him. I did try sometime ago to listen to his BPO Brahms cycle at Carnegie, but it was sold out. Imagine my surprise about the program of this concert with the Philadelphia Orchestra.

The Brahms Symphony No. 3 that opened the program was thoroughly captivating. Rattle had good structural grasp, but what impressed me the most was the unforced lyricism of the reading. Many passages had an almost chamber music like transparency. Even more impressive was the fact that Rattle achieved this without micromanagement or podium histrionics; rather, his economical gestures generated fluidity.

I have always liked Webern's Six Pieces, but on this evening it was the first time I REALLY heard all the foreboding and tragedy that are supposedly in the score. The playing was stunningly expressive. The Schumann "Rhenish" that followed was very good but I would have preferred a more driven account.

All in all, a most impressive concert. I have always enjoyed the Philadelphia in Carnegie Hall. On this occasion, although there were a few more bluffs than usual, the sound was most sumptuous. In fact I could not help thinking that the works were concert staples of Rattle's predecessor at the BPO. The surprise was that at times the smoothness and clarity of the playing did remind me of Karajan (at his best).

Addendum: NYT review
Posted by doctorjohn at 8:34 AM No comments: