I attended mainly for the Alpine Symphony, my favorite Strauss. It requires a gargantuan orchestra, and for this concert many in the APA orchestra joined the HKPO.

The poorly attended concert opened with the "sextet" from Strauss' opera Capriccio, played by 3 HKPO members and 3 students. After the shaky start, some beauty gradually came through. However, it was not effective as an opener.

Saint Saens' 2nd piano concerto is another favorite of mine, but this performance missed much of the elan that the piece should have. That said, many recordings failed in that respect too. Colleen Lee played well, but her tone lacked the fullness of her recitals, for which she's more suited. The orchestra was tidy.

Colleen Lee needs to hone her bearings. She was fine once she played the piano, but everything else exuded an extreme nervousness. The way she walked, took bows and acknowledged her partners were plainly awkward, and I think these parameters are important for a soloist.

The Alpine symphony was a disappointment. It took a long time to right the ragged playing. Things improved by the time the "summit" was reached. Unfortunately, the following episodes were prosaically rendered. There was no forboding and the storm was not terrifying at all. The closing pages were nicely done though. I joked to my friend that I did not experience the "Alpine", instead the ascent of a much smaller hill. The concert shows that indeed Strauss shows up the deficiencies of the performers (orchestra and conductor) much more than Mahler.

Posted by doctorjohn at 9:08 PM No comments: 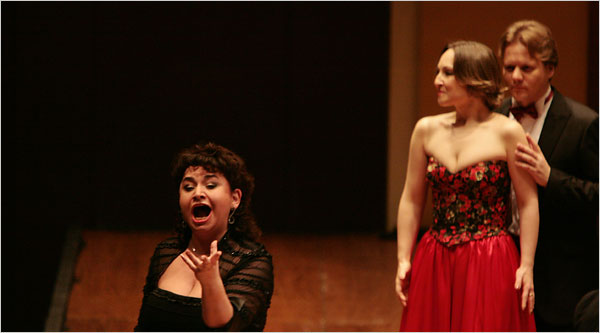 This concert performance of the "opera" Love for Three Oranges was part of Gergiev's Fall survey of Prokofiev's theater works with the Kirov Orchestra and Chorus of the Mariinsky Theater. Too bad I had to miss the performance next day, of Ivan The Terrible and Alexander Nevsky, the latter among my favorite Prokofiev! Note that in Spring Gergiev is giving the complete symphony cycle with the LSO and I just might be able to catch that, I hope!

The orchestra is not that big, with 12 players in each violin section. Yet, they gave an awesome performance that dwarfs everything Prokofiev that I have heard before, even including Munich/Celibedache's magisterial performance of the 5th symphony some years ago in HK. Tribute must be paid to the all-encompassing conducting of Gergiev, as detailed in the New York Times review. However, the virstuosity of the orchestra muct also be acknowledged. Every phrase was telling and meaningful. As more often than not, Russian players give you their all and in this performance the Kirov players definitely rolled up their sleeves and bared their souls. The chorus had more males than females and for sure Russian virility. There were a total of TWELVE singers, all very good. The whole was even more than the sum of its considerable parts. A triumph.

The score's greatness was fully revealed. No, listening to CDs would not do this piece justice (you'd be lucky if you make it through).

The performance makes you really ponder the empty slogans used to promote many also-run conductors and orchestras. And I don't just mean HKPO/EdW, I likely mean NYPO/Maazel too.

There is a whole contigent out there worshipping mediocrity, giving standing ovations to undeserving performances. Sign of the times. Thankfully, we still have the Russians.

Posted by doctorjohn at 4:24 AM No comments: 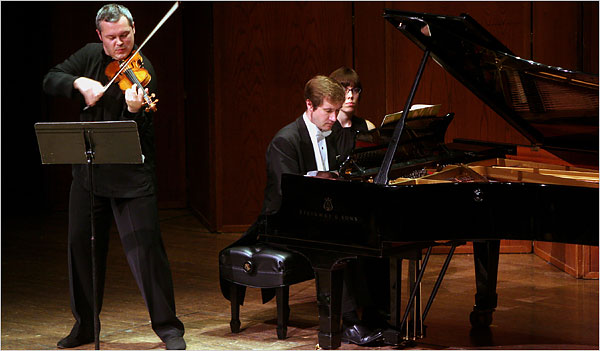 Last time I heard Repin's recital was with Boris Berezovsky. Lugansky has been making a name for himself and I was eager to hear the partnership.
Things started off beautifully with one of the best Debussy sonata I have heard, including recordings. Repin was truly refined and his grace meant style in this piece, in my opinion a difficult nut to crack. I did not hear too much subtlety in his partner's playing, but the whole was winsome.
Prokofiev is one of my favorite composers, and I was a little disappointed by the performance. The second movement lacked the ultimate ferocity, and elsewhere much of Prokofiev's lyricism did not come through. Lugansky's playing, besides its lack of subtlety, was too forceful for me, sometimes drowning out his partner.
The "Kreutzer" was very well played. Again, it was not the most singing performance, but Repin had the full measure. Here, Lugansky started to really bother me by his lack of insight.
A mixed bag for me, but the New York Times review was more enthusiastic.
Posted by doctorjohn at 4:38 AM No comments:

I went primarily for the Bruckner 9th, but was glad to have caught Lang Lang, my first time.

The Beethoven 1st was similar to the DG recording, though with more spontaneity. A few mannerism notwithstanding, I was impressed by Lang Lang's crisp and powerful playing, kept mostly along classical lines. The second version of the cadenza was a little too long for my taste. The New York Times review pretty much said it all.

Even more impressive was the tight accompaniment Eschenbach produced out of a moderately reduced orchestra. The two men obviously had great rapport together. The applause was thundering and there was a standing ovation (rather common these days, surprisingly). Unlike the previous day, Lang Lang did not give an encore.

I had a rather different response to Bruckner's 9th. It was marvellously played and architecturally sound. The first movement took a while to warm up but was grand by the time the coda arrived. The Scherzo was just too manic for my taste. The adagio was well anchored but two of the things I prize most in this music were glaringly missing. There was not much of a sense of struggle, usually conveyed by the dissonance, which were smoothed over by the playing. After the tumultuous music, what followed also lacked contrasting repose, not to say silver lining. Hence the performance truly felt unfinished, and not satisfying.

Sitting next to me was quite a music fan, who went on at length about how he would like to hear whatever fourth movement Bruckner did manage to complete (recorded by Harnoncourt, at least). He too was not too thrilled.
Posted by doctorjohn at 4:12 AM No comments: