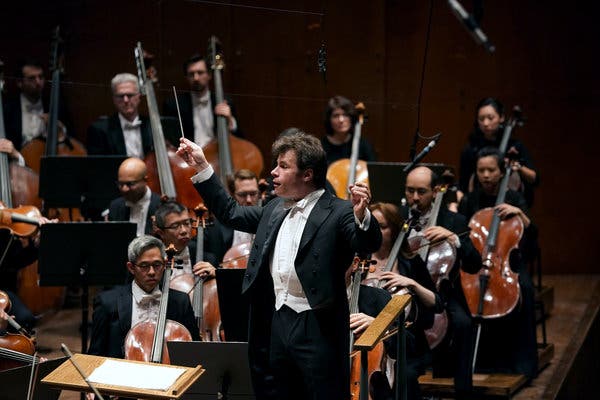 How he made them play! That was what I said to the lady next to me at the end of concert.

Jakob Hrusa is a young conductor very much in demand and on the rise. I knew him from recordings, but this was the first time I heard him live. He is now in charge of the Bamberg Symphony (an orchestra I have always liked; heard them under Jochum, in Bruckner no less) as well as principal guest conductor of The Philharmonia and Czech Philharmonic, all excellent orchestras. Here is a good interview. Judged by this concert, he is absolutely the real thing,

Concert opened with Janacek's Cunning Little Vixen Suite (arranged by Charles Mackerras), in a ravishingly played and atmospheric reading, but the piecemeal nature of the music, albeit highly interesting, still was not able to stop my mind from wandering off from time to time.

Prokofiev's Piano Concerto No. 3 received a solid reading from Simon Trpceski, who should be familiar to HK concert goers. Hrusa enabled a seamless partnership with the orchestra, which played with aplomb and vitality. Many details emerged quite naturally in this reading.

All of that did not prepare me for the sheer magnificence of Rimsky-Korsakov's Scheherazade, a thrice familiar score which in Hrusa's hands seemed to reveal freshness in every page. What is truly remarkable is that all the details were revealed in a most natural way (unlike Jaap, for example), never losing the overall architecture of the music. In one stretch in the second movement, the string figures had a distinct sense of speech, and indeed the orchestral musicians overall were fully engaged in dialogue, and that is the utmost praise for a conductor. The music speaks!

The orchestra played magnificently. It goes without saying that the brass section was mighty, worthy of the Sultan! What was equally gratifying was the characterful playing of the woodwinds. And the strings on this occasion excelled themselves in nuance, refinement and discipline. Concertmaster Frank Huang, formerly of the Houston Symphony, played his all-important solo's subtly, not at all like what a reviewer made of him in a previous Houston Symphony performance with Hrusa, but the same reviewer's comments on Hrusa I could agree with wholeheartedly.

The NY Phil has had a generally good review these days from the NY Times. Yet the NYT Review that includes this concert complained of loudness without fullness. Part of that is the persistent second-rate acoustics of this hall, but from my seat, third tier and close to the stage, the problems were minimized and indeed the sound was exciting. The so called full view good seats, which a critic is likely to be seated in, more often than not do not sound too good.

A great concert.
Posted by doctorjohn at 9:23 AM No comments: