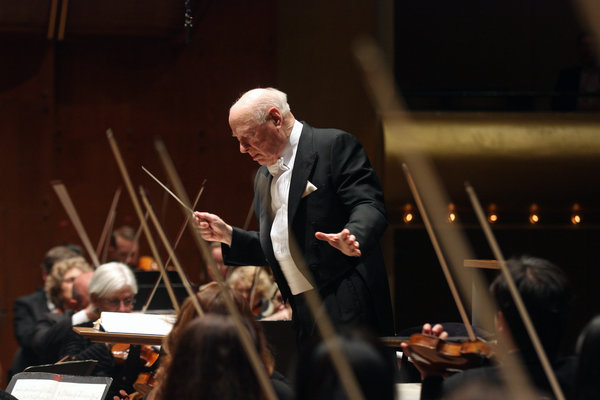 pic of Haitink from NYT

A frail Haitink returned to conduct the NYPO in Mahler 9. This last completed Mahler symphony has always been one of his calling cards. I love his first recording, which received universal praise, and still have vivid memory of his unsurpassed 9th with the Berlin Philharmonic at Carnegie a good three decades ago.

As with his performance with the same forces of Mahler 3 two years ago, Haitink directed the orchestra with minimal motions and absolutely no fuss, yet a sparingly used and modest tightening and shaking of the fist could elicit a thunderous response from the orchestra in true climaxes. Haitink mostly just let the orchestra play, and they did so with great character. Haitink rarely highlights, yet I have never heard more details in the score.

Although sometimes one may have wished for a little more sardonic edge, the music could not have unfolded more organically. An important element in this type of artless approach is the contribution of the players. The brass and winds were particularly irreproachable, characterful in solo's and lucid even in the densest passages.

Haitink has aged even more since two years ago. Even the little steps up and down the podium proved laborious. I hope I shall get to hear him again.

A new work by prize-winning composer Kevin Puts opened the program. The City was commissioned to commemorate the 100th anniversary of the Baltimore SO and 125th year of the Carnegie Hall. Alsop made a little speech. The work was three years in the making and the programmatic work unexpectedly "had to consider" the recent riots and aftermath of the Freddie Gray shooting. The music was predictable enough in a post-minimalist way. It was accompanied by a film by Robert Bartolomeo, an unending succession of shots of Baltimore Streets and old photos. I found all of this pedestrian, even tacky. To me, the work was an uninspiring transposition of Philip Glass' Koyaanisqatsi, not one of his best works and accompanied at its premiere by a boring film too.

In comparison to the NYPO of two days ago, the limitation of the Baltimore Symphony showed rather embarrassingly. Marin Alsop's all-baton manner, though fluid and non-histrionic, also contrasted with Haitink's economy. In Mahler 5, the orchestra had a good, integrated sound, but there were obvious weaknesses. The winds in particular did not project well the Mahlerian swagger. Lower strings were also a little too light to provide a foundation. The upper strings played very precisely and were well molded by Alsop, but they too lacked power in key moments. Overall, there was a lack of transparency in the playing. Alsop's interpretation was fine and straightforward, but the execution, though tidy, was not of the highest caliber.

NYT review
Posted by doctorjohn at 7:28 AM No comments: 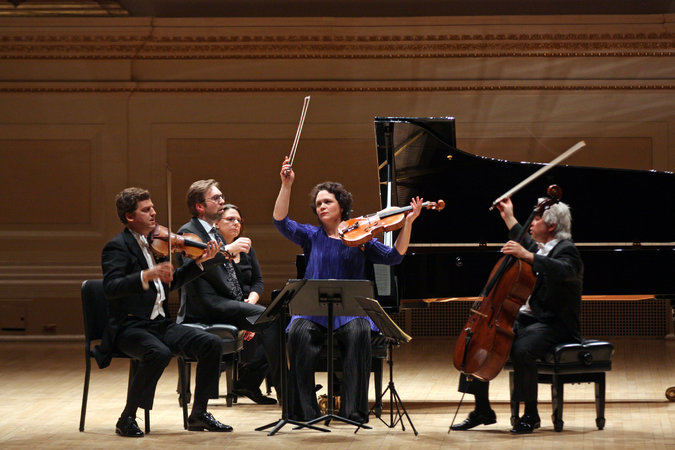 It is not so often one encounters one of Brahms' Piano Quartets in a program (usually performed by a string quartet with a guest pianist in the second half). To hear all three in one sitting is virtually unheard of, till now.

The players here are taking this program on tour. The original violinist was Christian Tetzlaff, who had to cancel the North American leg since his baby is due any day. They are lucky to have as replacement James Ehnes, equally internationally renowned violinist. Their first stop was 2 nights ago, at North Carolina (excellent local review here). So the players has had some time together before this concert.

ALL of the players are very experienced chamber music players. Leif Ove Andsnes have previously played with all the other musicians of the night, and on recordings serve as pianist to many a string quartet. James Ehnes has his own self-named String Quartet; Tabea Zimmermann is a founding member of the (excellent) Arcanto Quartet; Clemens Hagen is cellist of the Hagen Quartet. Their collective experience shone brightly in this program. Quartet No. 1 occupied the first half; the second half was lengthy as it had to accommodate the remaining two quartets, a total of about 90 minutes, taxing both the performers as well as the audience.

Heard in succession, even if separated by an intermission, the first two quartets, written in the same year, certainly sounded stylistically similar. Both received impeccable readings, but initially the first half, as the NC reviewer mentioned, sounded a bit tight. Sonically, the quartet opened up more in the second half - the piano sound was more lucid, and Ehnes' violin had more rosin. No. 3, written 20 years later, is a more enigmatic work; it was equally well played, its mercurial quality well caught, but the last once of pathos was not quite evident (for those who like it tat way).

There was not a whiff of indulgence. Andsnes' playing, as usual, was straightforward, but not strait-laced. Rhythms were finely sprung, and accents were strong when needed, providing a firm fulcrum for the strings to balance on. Yet, Andsnes could be poetic, colourful and atmospheric when needed. The intonation of the three string players were remarkable, never wavering. Ehnes' sound was very smooth and his phrasing always superbly musical; only occasionally a little more risk taking was desired. Hagen was superbly colourful and nuanced, better than I remember him with the Hagen Quartet. Most amazing of all was Zimmermann - no bones about it, the best violist I have ever heard. Most violist struggle to be heard; not Zimemrmann, who has a big tone, and here more often than not seemed to prompt, challenge and lead with a particularly strong phrase. Spellbinding! Most impressive was the unison - when the strings doubled, one could not tell them apart!

The reception was tremendous. At the intermission, I told the nice lady next to me that I could leave then - because it felt like a climax had been delivered, and I was thoroughly satisfied. Well, by the end of the concert, I felt like that three times! One of the best concerts that I have attended in the past decade.

p.s. after this article was published, the NYT review came in.
Posted by doctorjohn at 6:09 PM No comments: