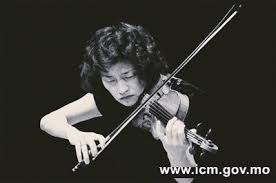 KyungWha Chung was out of the circuit for many years due to a finger injury, but according to the program she has fully recovered and has embarked on tours with Kevin Kenner, no slouch nor mere accompanist. Two friends heard this program in Macau earlier and raved about it, so we had high expectations.

I have mostly admired her recordings (my favorite is Bruch with Kempe), but have heard her only once before, in the early 80's in Chicago, with Previn in Prokofiev. Unfortunately, my student cheap seat had terrible acoustics, so it did not leave me with much of an impression.


This concert was sold out, but thanks to a bizarre twist of event I got a seat in the VIP section, where the sonics are excellent.

Chung appeared quite nervous, throwing glances at the audience and jittery to the slightest noise. The two halves both opened with a classical work, followed by a romantic one, and in both the latter fared better.

Beethoven's Spring Sonata immediately set the tone for the evening. The highly dramatic reading, with its wide dynamics, was too deliberately honed to convey the usual "youthful" feeling, but it easily held my attention. Chung's sound was very beautiful and fiercely expressive, sometimes at the expense of intonation.

This was followed by Grieg's Sonata No. 3 in a masterly performance. The duo's intensely dramatic approach brought out every nuance in the strange first movement, in a stunning performance the kaleidoscopic content of which seemed just to pour forth and overfill the hall. I found details I have never noticed before, ranging from wistfulness to foreboding, even terror. So even if elsewhere the playing was not quite lyrical I don't think I'd ever hear better.

Mozart's K379 was too deliberate and static for my taste, and I found the piano part rather square.

Franck's Sonata was quite different from her famous recording, less lyrical, more shaded and highly dramatic. The approach was equally satisfying.

One thing is for certain: Chung has things to say, and is thirsty after the dry spell of her injury. She is a tiger who has just broken out of the cage. The duo have clearly worked hard on their material and drastically rethought everything. I have the highest respect for that. Those used to classic recordings of the works here could have been troubled, but I think a little shock is good occasionally.

At the end, the duo worked the audience like the pro's they are and delivered 4 wonderful encores of Schubert, Kreisler and Elgar.

Despite technical blemishes, Chung's playing was ravishing and had a vocal quality to it - sometimes perhaps more expressive Callas than smooth Tebaldi. I hope they come back soon!

Posted by doctorjohn at 7:02 PM